This week the Kangaroos assisted their educator in creating some canvas art for the foyer. We hope it will brighten the room and make our parents smile as they begin and conclude their day with us at Kindy Patch! 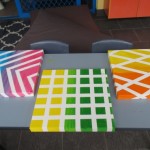 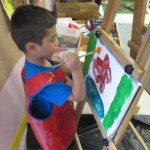 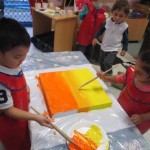 Due to wet weather earlier in the week the Cockatoos took part in some art which correlated to the book they have been focusing on with their educators. The children have been learning about sea creatures and to extend on this they have been reading ‘The Rainbow Fish.’ The cockatoos spent the day painting and decorating bits of paper plates; making their very own ‘rainbow fish. 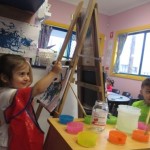 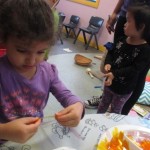 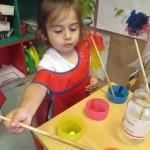 The Kangaroos began their day in a circle listening to Miss Sam and she revealed yet another new activity for the children. As they sat in a circle Miss Sam brought out the new insect and spider moulds; one after the other the children were told the name of each mini beast and asked to count the legs and describe what they see. Passing each mould around the circle, the children gave their opinions and were very intrigues by the insects and spiders. “Miss Sam this spider is hairy,” Zayne says as he observes the tarantula. “Miss Sam, this one looks like a lady beetle by without spots,” Harry says, proving to be very observant. They later make their way over to our new painting easel, and use the time to paint and create their own version and understanding of bugs and insects. “Miss Sam, have a look, I’ve made 2 Caves and a hairy spider like the one we were holding before…I made an orange and a green cave and my spider is red.” Ben’s ability to transfer his imagination onto paper is quite amazing and he does so with such poise and confidence. Ben and his peers really enjoy this topic and prove so as they laugh, play and discuss openly their ideas about the topic in small group conversations! 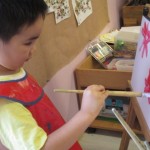 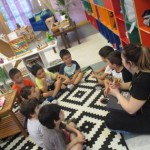 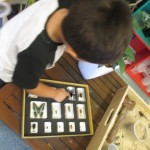 This week in the Kangaroos room as we had a special visit from Julie, our new Zumba instructor. Julie joined us this morning to show our friends what it means to stay fit and healthy through song and dance classes.  The children showed a great interest in Julie and her program as they joined in with the dancing and singing; smiling the whole way through. They began the lesson off with a few stretches and breathing exercises and then transitioned into the dance lesson, learning some moves to some of their favourite songs. It was a really positive vibe and a great idea for the children and staff. “Miss Sam that was so much fun,” Lilly says at the conclusion of the class. 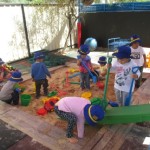 As the Kangaroos spend some time outdoors, Katelyn and Andy explore the new sand pit toys with their peers. Using the new buckets and spades the children make castles and birthday cakes, mountains and snow. The children use their imagination and initiate their own play, as they laugh and play in their small groups; making conversations amongst one another about their play and imagination. “These big shovels are really nice and fun,” Katelyn says happily.